Fortnite leaks are a neverending source of entertainment and discussion among fans of Epic’s megahit battle royale. The smallest of details, true or not, can spread rapidly throughout social media, to the point where it can be hard to stay on top of the latest information.

There are plenty of well-known sources of Fortnite news and leaks, especially on Twitter. And while leaked info can, on occasion, prove to be true, it’s often quite hard to work out who exactly to listen to and trust. That’s why we’ve put together this here guide of regularly updated Fortnite leaks and info.

Given the nature of leaks, it’s always best to temper your expectations and accept that not every piece of leaked info will be 100% accurate. That said, we’ll do our best to make it clear when a leak is especially dubious or outright untrue. So, without further ado, here are the latest Fortnite leaks. Oh, and be sure to check back regularly as we’ll be updating this guide with every new piece of info we uncover.

Following the surprise reveal of the Dad of War – Kratos, as a playable skin in Fortnite, HyperX has unearthed that Master Chief, the main protagonist from the Halo series, is also getting a skin very soon. Kratos appeared in the item shop, so chances are it’ll be the same for the Chief.

This is apparently part of the ‘Gaming Legends series’ and there’s speculation that it could be more than just these two characters, so stay tuned!

Yes, you’ll soon be taking to the skies to take on Galactus to put a stop to his world-eating habits, but how on earth would you even get up there? According to iFireMonkey, the answer is jetpacks! This teaser image was accompanied by a second tweet, with the words “Prepare for the final battle.” and  reveals that the Galactus event start time is 4pm EST / 1pm PST / 9pm GMT on December 1, 2020.

A recent datamine from iFireMonkey and HYPEX shows some kind of football theme coming to Fortnite soon. Both referees and players will be available to unlock as Skins, as well as Penalty and It’s Good emotes.

Players will be able to be customised in the colours of every major NFL team – including team badges. There are 10 variants of the referee skins, named as follows:

It looks like we’re getting a bunch of DC related skins next, as the Last Laugh bundle trailer above suggests. Here we see the Joker laying C4 on all sorts of things, accompanied by Poison Ivy and another villainous cretin wearing metallic armour named Midas Rex.

The big thing though is that Remote Mines are coming back to Fortnite, which hasn’t been seen in the game since Patch 13.0.

Both FireMonkey and HYPEX have leaked that Black Widow will be the next tournament skin. In addition, FireMonkey has managed to get the following information about the tournament: 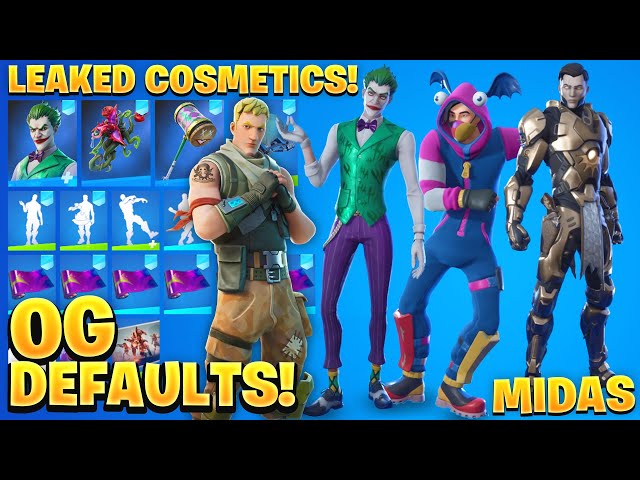 Halloween is well and truly over with the release of the V14.50 Fortnite update. HYPEX has revealed all of the upcoming skins and emotes hitting the game within the next month. As expected, the Joker will be making his Fortnite debut, along with Poison Ivy and Midas Rex.

FireMonkey discovered a V-Bucks promotion that is set to run until December 31. If players purchase any V-Bucks or make a purchase involving real money, they can get up to two months of Disney+ for free. This promotion isn’t live yet, but expect an official announcement over the next few days.